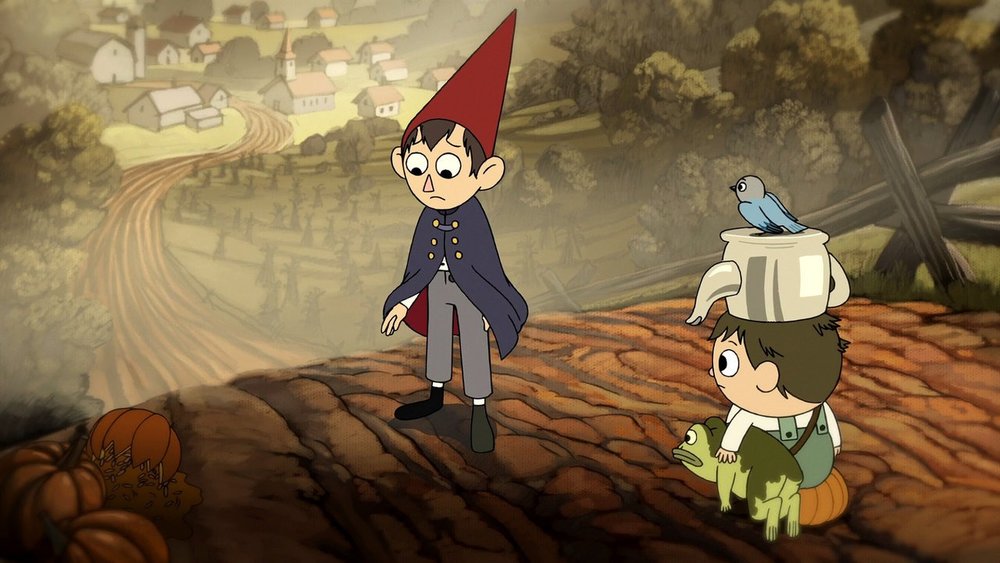 Though much of the fun of Halloween is the spooks and frights, one of my favorite elements of the holiday is the aesthetic. Fall leaves, pumpkins, the orange of the dying light over withering trees, it’s all an exhilarating part of the experience. “Over the Garden Wall” understand this aesthetic, utilizing it to create a haunting, but weirdly warm atmosphere for their nightmarish fable of a beast, a woodsman, and two boys trying to make their way home.

Children’s media is the current era can easily be accused or losing a bit of the darkness that permeated the medium in the 80s and 90s. Where once we had films like Neverending Story or Goonies, full of wry jokes, dying horses, and horrifying monsters, much of today’s media for kids is more often wiped clean of any such elements,to be replaced by butt  jokes and crass humor. It’s a delight, then, to see that Cartoon Network had, for the many years, been embracing the darker side of children’s’ programming,  with shows like Steven Universe and Adventure Time, shows not afraid to show horrifying moments or characters, and that don’t shy away from more intellectual or high brow storylines. Over the Garden Wall easily falls within these bounds, as this production is full of haunting imagery and smart writing, borrowing as much from Mark Twain as Walt Disney.

The world of Over the Garden Wall is one the type of which we don’t see often. Instead of getting inspiration from the usual spots of Disney, Pixar, or 80s cartoons, this show’s creators pull from older inspirations. It’s obvious from early on that Over the Garden Wall is mostly set within a world stuck in the late 19th to early 20th century, so it’s a delight, for anyone familiar with early animation, to see creations based on the work of luminaries such as Max Fleischer and Winsor McCay, with the exaggerated animation and wild flights of fancy. In particular one episode which a group of people in a pub bears a striking resemblance to other Fleischer shorts, with their stretchy, elastic movement and Betty Boop-ish figures, which is an absolutely delightful watch. Of course, there’s no shortage of homages to early Disney, and even a touch of Cal Arts Style in certain sequences, but it’s a joy to see a show pulling from new inspirations to create something wholly unique.

One never truly knows what to expect from each episode of “Over the Garden Wall”. One episode with be a horror show, full of witches, monsters, and the threat of child-eating, and the next will be a broad, comedic ghost story.  Because the world is so fantastical, practically anything can happen, and creators Patrick McHale fills this world with all manner of intriguing characters, whether they be mainstays like The Woodsman and the Beasts, monsters-of-the-week like the horrifying pumpkin king Enoch, or even characters who spend just a few seconds on the screen, like a Highwaymen who sings about killing and stealing from others to “make ends meet”. Its a credit to the creator that even the smallest of characters has so much personality, that we could watch an entire show for just about anything of them and be entertained.

“Over the Garden Wall” might not be a traditional horror story (it’s more in the vein of a dark fantasy like Labyrinth of The Neverending Story”), but it’s a miniseries absolutely bursting with the soul of Halloween. It’s sure to become a Halloween staple in my house, and is a must for anyone looking for lighter fair among the slashers and haunted house pictures.