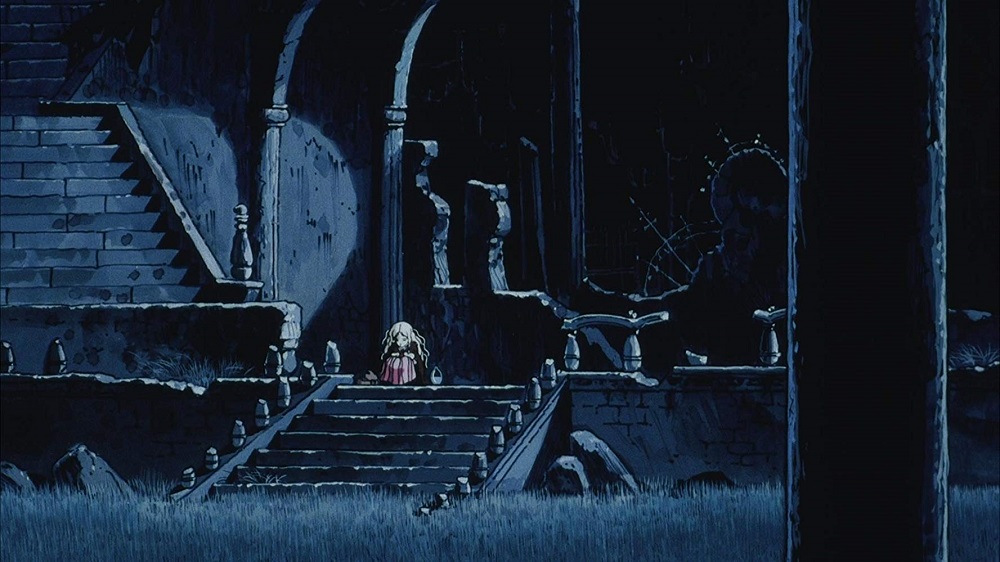 There are few films in this year’s Jyanween that may not always feel like horror films, but are so bizarre that they defy categorization. Anyone who watches Angel’s Egg will see, it is certainly one such film. Even if it doesn’t quite scare you, there’s an unnerving obscurity and uncertainty that you just can’t shake. Though most of Mamoru Oshii films could be considered hard to follow, Angel’s Egg, his collaboration with acclaimed character designer Yoshitaka Amano, pushes this bafflement to entirely new levels, becoming so confusing that it would almost take a viewing guide and a series of essays even to begin to make sense of what’s on screen (so frankly, you shouldn’t expect that here, and also be ready for me to get some things MAJORLY wrong).

The first you’ll notice about Angel’s Egg is how gorgeous it is. The way Oshii and Amano play with light and shadow is stunning, and their use of bright whites to burst through the frame catches our attention and demands our attention in several key moments. This beauty makes some of the slower scenes a much easier sit. In one scene in particular, we watch what is basically a static scene: one of our characters is sleeping, the other sitting by her bed, as a fire dies in the foreground. This is so well rendered it could be hung in a gallery, and the way the director, and animators slightly adjust the scene as the as the light becomes dimmer is incredibly impressive. There were multiple moments in the film where I had to stop and just take in the beauty of a particular scene, and there are so many shots in the film that I wish I could hang on my wall.

All this is enhanced by Yoshihiro Kanno’s sumptuous score. Whether it’s the more futuristic synth lines in the beginning of the piece, or the gentle harp and choral orchestrations in the film’s later scenes, the film creates an aural tapestry that one can get lost in. In a film with so little dialog, the music is forced to do a lot of heavy lifting, and in these cases sometimes they film can fall into manipulation, but Kanno’s music here is keen to set the mood, while never truly telling its audience how they should feel. When combined with the film’s excellent sound design, so full of falling rain and wind-blown grasses that it must be a joy to ASMR fans, an overwhelming soundscape is created that leaves it audience breathless.

It may seem like I’m dancing around the plot of this film, but that’s mostly because there’s not much there (or, conversely, way too much). Early in the film, we’re introduced to a mysterious girl carrying an egg. She wanders a nearly deserted city, where she meets a man, just as mysterious, carrying a weapon that has more than a passing resemblance to a cross. They two wander together, spouting slightly off-base biblical stories and learning secrets about the egg, and where it may have come from. Along the way, there are a number of trippy, bizarre sequences, including a scene in which a group of fishermen, running around with the ferocity of soldiers, throw harpoons at shadow fish, in the process destroying the city around; and several in which a large, round ship with a single eye, filled with statues of women, appears on, and subsequently leaves, the city. If these sound perplexing on paper, I can assure you, these scenes only make slightly more sense in the actual film.

Angel’s Egg is a hard one to crack, confounding to the point of near impenetrability, but it’s without a doubt a gorgeous ride, and with the fantastic soundtrack carrying you along, it will more than likely be a journey you won’t regret taking. Just be sure you’ve had your coffee, as the calming nature of the sound design and slow pacing create the perfect atmosphere for a short nap if you’re not prepared.